The International Consumer Electronics Show (CES) is sponsored by the Consumer Electronics Manufacturers Association of the United States (CEA). This 2017 CES will be held in Las Vegas, USA from January 5th to January 8th. Sr., VR/AR is undoubtedly a major highlight of the conference. So, what are the VR/AR vendors that are worth watching at CES? We worked hard to organize a list of over 80 exhibitors, RBs, and AR vendors at home and abroad, as well as basic information and booth locations. Here's a look at which companies will be unveiled! 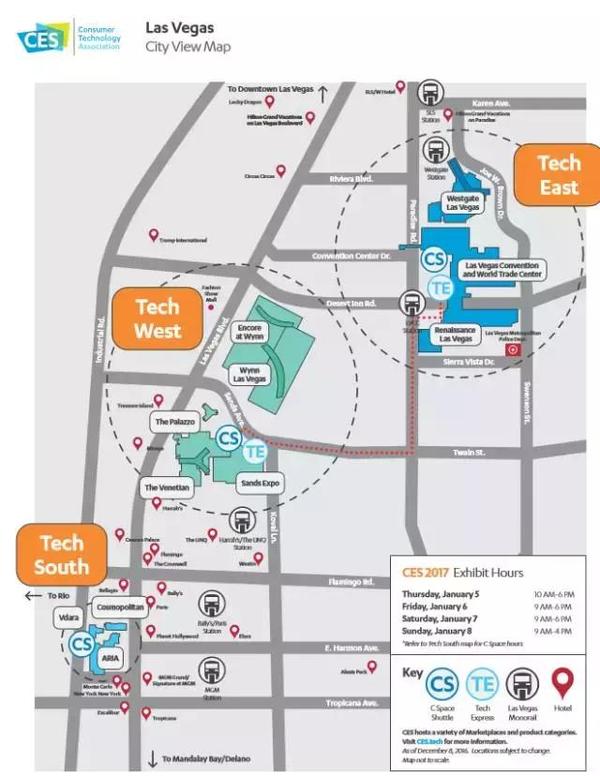 The AR/VR that you are most concerned with mainly depends on the Eastern District. 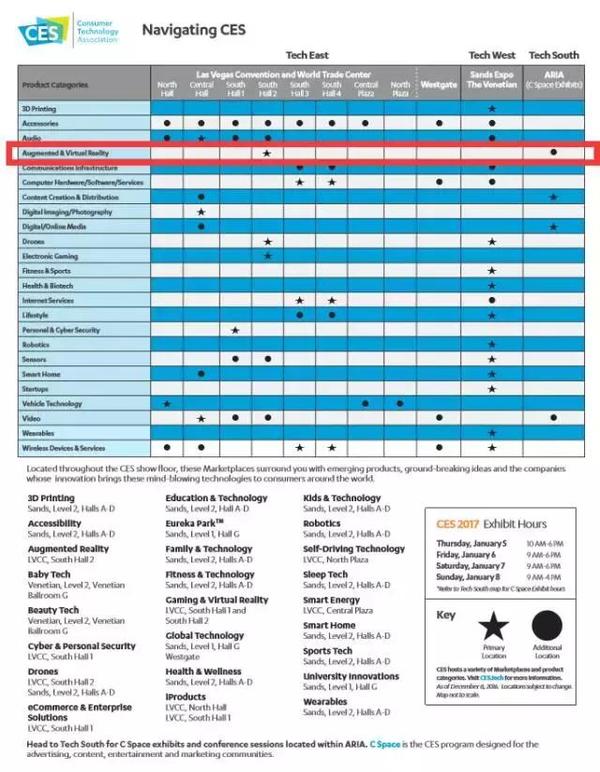 Letâ€™s take a look at the big factories

Sony has a booth in the AR exhibition area. In the introduction of the CES official website, it did not mention PSVR. Instead, it stated that it will display innovations in AR headshots, gesture recognition, and AR interaction technologies. Whether Sony will launch AR-related technologies or products at CES is expected.

Samsung may launch a new generation of Gear VR at CES.

It is reported that the Microsoft VR helmet will be available soon in March of next year, and CES will be the best chance for Microsoft to display VR helmets.

Huawei CEO Yu Chengdong will deliver a speech at CES and may disclose Huawei's plans for VR.

Millet VR glasses are already on the market. Whether Xiaomi will have more action at CES is worth looking forward to.

NASA has always had a passion for VR technology. For the past two decades, it has been using VR technology to train astronauts for spacewalking.

Octagon Studio is dedicated to developing AR/VR solutions and products for mobile phones and wearable devices.

ODG is a United States AR glasses manufacturer, is committed to changing the automotive, medical and industrial areas through AR glasses.

Cloud Dreams specializes in 3D digital technology development and application, and is committed to using 3D technology to change the fashion retail sector.

Dojo was established in 2011, focusing on VR software and hardware technology research, content and application development, covering the VR industry upstream and downstream.

Orbbec is a 3D camera manufacturer and has launched the world's first 3D camera Perscape with a built-in full-function computer.

Vayyar imaging sensors can penetrate obstacles and display a 3D image of the internal structure of the object. Vayyar's 3D sensor technology can see through objects, track targets, and detect situations around users.

3DRudder is a foot input device, players can move freely in the VR environment, free hands, enhance the game experience.

Storm mirror focuses on the mobile VR platform. Storm mirror believes VR/AR technology will be at the center of the next generation Internet revolution.

Extreme Wiki is a VR game content platform, developed a full touch VR controller, and has the technology to convert mobile games to VR versions in 30 seconds.

Cappasity is an online store that can easily create 3D, VR/AR shopping experiences. The product includes free software for creating 3D graphics, and can insert 3D graphics into the e-commerce website and mobile application platform.

CaptoGlove LLC is an American startup that specializes in the development of VR gamepads.

DXRacer is a manufacturer of games and office chairs.

Large-scale, accurate image recognition and other global leading technologies are dedicated to providing the most natural human-computer interaction services.

Artificial intelligence companies that mine the value of the deepest data.

I AM Cardboard provides mobile VR headsets and is one of the certified partners of Google's "Work for Google Cardboard" program.

Idealens is a virtual reality device, system platform, and content provider. In July 2015, Idealens launched the VR IDEALENS K1. In June 2016, it launched the IDEALENS K2 VR in Tokyo.

Innosimulation is a Korean company specializing in the development of various simulators, motion platforms and virtual reality systems. Its products include VR motion platforms.

Aiyun Global is committed to developing game peripherals such as FPS shooter guns.

Lumus is an AR vendor based in Israel and produces high-end transparent near-eye displays for augmented reality, mixed reality technology, and smart glasses.

Merge VR is an American VR company. Its current products include Merge VR glasses and VR application website VRSTART. The latest product is a universal controller and more new products will be announced at CES.

ModiFace focuses on beauty AR technology and launches a makeup network/mobile application that allows users to complete virtual face-up makeup on the entire face online. Currently, it provides over 200 AR applications for brands such as Sephora, L'Oreal, and Unilever.

Little School Technology specializes in VR hardware and applications. It was founded by a group of dream practitioners who have a passion for VR technology. They are the first geeks in the field of virtual reality in China and are deeply involved in communication, internet, wearable, VR/ AR field for more than ten years.

The company is located in South Korea and its focus areas include MR, immersive audio, motion tracking VR interactive systems, and more.

Shenzhen Chenhui Electronics Co., Ltd. was founded in 2008 in Shenzhen, China. The company specializes in the development, production and sales of game accessories such as VR glasses, Bluetooth keyboards and game controllers.

Shenzhen Focalmax Technology Co., Ltd. (Focalmax) is a global smart terminal manufacturer and mobile internet service provider, and is committed to creating "optics + communications + terminals + applications" based on the optical industry, mobile Internet industry and smart terminals. Complete ecosystem. The registered capital of the company exceeds US$30 million and has more than 100 R&D personnel, more than 100 invention patents and 7 publications copyrights. Focalmax released the Scati ONE machine to build a VR ecosystem.

Shenzhen Mi Shen Technology Co., Ltd. was founded in 2013 and is one of professional game accessories R&D and production companies. The factory has more than 200 employees and covers an area of â€‹â€‹more than 10,000 square meters.

Founded in 2008, the company is an expert in the field of batteries, providing complete lithium battery power solutions, including the design and selection of batteries and other gaming products.

Founded in 2001, the company is a high-tech private enterprise specialized in design, development, production and sales of computer peripheral products. After several years of painstaking operation, the company has a total investment of 25 million RMB. It now employs more than 1,000 people and has 18 production lines with advanced technology in the country. Its annual production capacity is 7.2 million sets. It is a brand of HP, Lenovo and ASUS. OEM suppliers.

Shenzhen Soray Electronic Technology Co., Ltd. was established in 2002. It is a private high-tech enterprise specializing in the development, development, mold, injection molding, fuel injection and electronic assembly production of computer peripheral products. The product development, development and production The process is strictly controlled in accordance with the requirements of ISO9001. At the same time, it has its own game brand "AULA" and can also complete OEM and ODM on demand.

Shoogee is a German manufacturer of mobile VR glasses.

Tobii is a Swedish eye-tracking technology company committed to changing the way users interact with computers, games and cars.

VISR is a British VR company that will announce revolutionary imaging equipment at CES.

VisualPathy is a virtual reality platform that provides display services for VR photographers and users can traverse to various event sites.

VRTIFY is a VR/MR music platform where users can traverse to the front of the concert in VRTIFY for an unprecedented musical experience.

Founded in 1999, Somic has become one of China's most famous earphone manufacturers and is developing the Somic brand globally. Mainly engaged in gaming headphones, music headphones, telephone headsets and computer headsets.

The Guangzhou Digital Technology Co., Ltd., referred to as VR, is an innovative high-tech company focused on virtual reality technology development and application. It has a technical R&D laboratory, VR content studio, hardware production base and brand operation team, and has deployed more than 3,000 VR offline stores in more than 50 countries and regions.

Founded in 2004, Guangzhou Xinru Plastic Film Co., Ltd. is a professional supplier of manufacturing, processing and sales of protective film. The company's LCD protection sticker has a processing capacity of 80,000 pieces per day. The product is a quality supplier to many mobile phone chain giants in China and is exported to more than a dozen countries in Europe and America.

Lexiang Technology is a domestic VR hardware manufacturer. At this exhibition, it will be able to see the world debut of its new generation of PC helmet E3 and E-Polaris space positioning solutions.

â€œCat Eye Visionâ€ is committed to the development of VR content. Its business areas include VR3D modeling, VR games, VR hardware devices and VR live broadcasting platforms. Among them, VR 3D business relies on powerful technology advantages thanks to its top-level technical team and VR hardware equipment. The unique software and hardware industry application solutions have enabled Cateye to gain a leading position in the industry.

FOVE is a Japanese company that launched the world's first eye-tracking VR headset.

Founded in 2009, NextVR has 26 VR patented technologies from capture, compression, transmission and content display. After the founding of NextVR, it provides live coverage of sports events, American presidential debates, rock concerts, and more.

Anima Technika sro. The drone game team based in Slovakia has launched Drone n Base, a mobile drone war game that will be launched at the CES.

Ant Vision is a domestic VR hardware manufacturer, and its main products include Ant Vision VR helmets and VR cameras.

Otto Technology is committed to the development of smart wearable devices. The main product is the AR Glasses CoolGlass ONE.

Zeiss is a professional German lens company and its products include VR helmet VR ONE Plus as well as photo and film lenses.

Freefly VR is a mobile VR headset produced by Proteus VR Labs and will be available for sale in the first quarter of 2015. Proteus VR Labs will introduce a new generation of VR heads at CES.

Draw-wire sensors of the wire sensor series measure with high linearity across the entire measuring range and are used for distance and position measurements of 100mm up to 20,000mm. Draw-wire sensors from LANDER are ideal for integration and subsequent assembly in serial OEM applications, e.g., in medical devices, lifts, conveyors and automotive engineering.